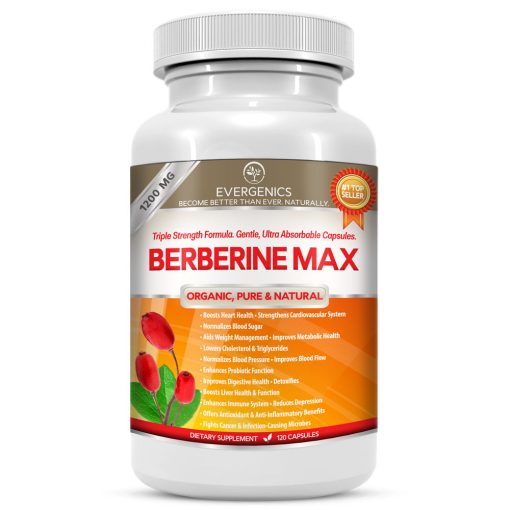 According To Research: How Berberine Works

Offers Protection from Heart Disease: Lowers Cholesterol and Other Markers

Heart disease can occur when excess levels of cholesterol build up in the blood. Atherosclerosis, a form of heart disease caused by high cholesterol, is a leading cause of heart attacks and strokes. A review of eleven studies, conducted with 874 subjects, in Planta Medica by Thieme Medical Publishers concludes that berberine supplementation lowers total cholesterol, LDL cholesterol and blood triglycerides.1ncbi.nlm.nih.gov

Elevated levels of apolipoprotein B (ApoB) are another indication of increased risk for cardiovascular disease according to the Journal of the American Heart Association.2ahajournals.org One study involving 40 subjects over 4 weeks shows that berberine supplementation can decrease ApoB by 15%.3nih.gov

Researchers treated 156 congestive heart failure patients with conventional therapy; approximately half of that group was also given berberine treatment daily. The berberine group recorded significant improvements in all areas tested. Increases in left ventricular ejection fraction (a measure of heart function), exercise capacity and quality of life compared to the control group were recorded. After long-term follow-up there was a notable decrease in mortality in the berberine group. No side effects were reported from the daily berberine supplementation. This study was published in the American Journal of Cardiology.4American J. Cardiology

In a study of 36 adults published in the medical journal, Metabolism: Clinical and Experimental, berberine was found to be as effective as the drug metformin (brand name Glucophage) at reducing blood glucose levels.9ncbi.nlm.nih.gov

Research conducted on 116 patients with type 2 diabetes and dyslipidemia (a condition of abnormal amounts of cholesterol, triglycerides or fat phospholipids in the blood) showed a reduction in fasting and postmeal blood sugar levels by 20% after supplementation with berberine. This study, published in the Journal of Clinical Endocrinology and Metabolism, declared berberine “safe and effective” in the treatment of type 2 diabetes and dyslipidemia.10ncbi.nlm.nih.gov

In a weight loss study published in Phytomedicine, human patients taking berberine daily for twelve weeks lost an average of five pounds and 3.6% body fat. In this research, treatment with berberine reduced blood levels of triglycerides by 23% and cholesterol by 12.2%.11Sciencedirect.com At the conclusion of this study, extensive blood, heart, kidney and liver tests were conducted; no adverse side effects were found as a result of berberine supplementation.

Evidence-Based Complementary and Alternative Medicine published a study in which both male and female subjects took 1200mg of berberine daily for three months. Berberine caused weight loss and slimming by influencing the hormones insulin, leptin and adiponectin. Subjects decreased their body mass index measurements from 31.5 to 27.4. Decreased levels of visceral fat, LDL cholesterol and triglycerides were also observed.12ncbi.nlm.nih.gov

There are even more scientific findings for those looking for a natural way to lose weight, fat and inches with a dietary supplement like berberine. Recent research shows that berberine fights fat at the cellular level by decreasing the size and proliferation of fat cells.13ncbi.nlm.nih.gov 14ncbi.nlm.nih.gov Researchers, Zhang Z. et al., say berberine is a fat-burning catalyst that helps the body burn more energy at rest: it activates brown adipose tissue which promotes thermogenesis and increases the use of stored fat for energy requirements.15ncbi.nlm.nih.gov

But what if the same can be accomplished without the exercise and dieting but by simply taking berberine? It’s possible according to research published by the Natural Medicine Journal.16Natural Med. Journal

Berberine alone may offer the same therapeutic benefits of exercise and diet restriction by activating an enzyme called AMPK (adenosine monophosphate-activated protein kinase). AMPK plays a vital role in turning human metabolic function on or off. When activated AMPK helps keep lipid, glucose and energy at healthy levels, and it boosts metabolism. When AMPK is deactivated the opposite occurs: those markers go towards unhealthy levels similar to those of a person that overeats and lives a sedentary lifestyle.

Excerise and dieting activate AMPK–so does berberine. What if it is not, directly, the pumping of the legs, flexing of the arms, restricting of the caloric intake and elevating of the heart rate that moves cholesterol, triglycerides, sugar and body weight to healthier levels? It might be that AMPK activation is causing the improvements in those health factors, and you can get the same benefits, without the exercise and diet, by supplementing with berberine.17Natural Med. Journal Researchers say that focusing on the use of therapies and agents, like berberine, to activate AMPK may be the key to avoiding conditions like hyperglycemia, high blood pressure and hyperlipidemia that cause obesity, diabetes and heart disease.18ncbi.nlm.nih.gov

Clinical studies have shown that berberine can stop and destroy numerous types of cancer in many areas of the body.

The medical use of berberine as an antioxidant therapy has been reported in the International Journal of Endocrinology as a treatment for: “…diabetic cardiomyopathy due to its antioxidant and anti-inflammatory activities.24Intl. Jrnl. of Endocrinology

Inflammation is a normal response that happens at the site of an injury or infection as the body is trying to heal; typically redness, swelling, heat or pain comes but goes away after the area heals.

The good news is there are healthy dietary solutions to help combat chronic inflammation, and berberine is probably the most potent medicinal ingredient we don’t hear enough about.

Berberine has demonstrated potent anti-inflammatory effectiveness in studies both in vitro and in vivo.29American Jrnl. of Phys.

Studies have shown that berberine can decrease inflammation in many vital areas:

Berberine Fights Infectious Disease To Keep You Alive And Well

Disease-causing microorganisms are lurking and spreading almost everywhere you look:

→ On inanimate objects like doorknobs, countertops, bus seats, faucets and kitchen tables
→ From handshakes, touches, coughs and kisses
→ From bites by bugs, pets and animals
→ In contaminated foods like under-cooked meats spreading E.coli

Lab results published in Bioorganic and Medicinal Chemistry showed that a berberine formula was more effective than the drug oseltamivir (brand name Tamiflu) at inhibiting strains of the influenza virus.35ncbi.nlm.nih.gov In research published by International Immunopharmacology, berberine was successful at blocking the growth of H1N1 influenza A strains. Chinese research also found berberine to inhibit the influenza virus both in vitro and in vivo.36Chinese Journal of Int. Medicine

For decades, both the Alternative Medicine Review and Science China have recognized the antibacterial properties of berberine in the treatment of bacterial diarrhea. Diarrhea that lasts for more than several days can be an indication of serious infection or inflammatory bowel disease.37ncbi.nlm.nih.gov 38ncbi.nlm.nih.gov

Research has shown berberine to be effective at fighting the most prevalent human fungal pathogen, Candida albicans.39Cell.com 40journals.plos.org 41ncbi.nlm.nih.gov Candida infections can take place in the mouth and throat (thrush) or vagina (yeast infection). More serious, invasive candidiasis can affect the heart, brain, eyes and other vital parts of the body. Candida fungus is the most common cause of urinary tract infection.

20,000 Americans, including many children, die each year from MRSA infection.42uchicago.edu According to the Mayo Clinic, most MRSA (Methicillin-resistant Staphylococcus aureus) infections affect people who have been in hospitals and other health care facilities.43mayoclinic.org MRSA infection is caused by a type of staph bacteria that’s become resistant to many antibiotics. It is estimated that 90,000 suffer from invasive MSRA infection. Anyone can get MRSA. It can cause skin and lung (pneumonia) infections, and if not treated MRSA can be fatal.

Tests have shown that berberine may be effective at stopping MRSA. In research published in the Journal of Medicinal Food, berberine exhibited antimicrobial activity against all tested strains of MRSA. In this study MRSA adhesion and intracellular invasion were substantially decreased in the group treated with berberine compared to the control group. Results of this testing suggest that berberine may also “restore the effectiveness of beta-lactam antibiotics against MRSA.”44ncbi.nlm.nih.gov

Fatty liver is a disorder that occurs when excess fat builds up in the liver. It is caused by alcohol or other factors including obesity, diabetes and hyperlipidemia. Symptoms include weakness, confusion, jaundice and fatigue. If fatty liver disorder is not controlled, cirrhosis can occur leading to liver cancer, infection, toxic build-up and/or high blood pressure.

Research by J. Brusq et al. says that berberine improves liver health in two ways: by reducing fat storage in the liver and inhibiting lipid synthesis in human hepatocytes (liver cells). These studies are found in the Journal Of Lipid Research.45ncbi.nlm.nih.gov

In a study published in the American Journal of Physiology, berberine was found to decrease the severity of fatty liver disease by reducing the weight of the liver and its triglyceride and cholesterol contents.46ncbi.nlm.nih.gov

According to Dr. Susan Blum, assistant clinical professor at the Icahn School of Medicine at Mt. Sinai, people wanting to avoid the effects of bad gut flora, like weight gain, gas, bloating, fatigue and autoimmune disease, should consider “a gut-cleansing program using herbs like berberine.” Studies support the claims of a rise in body fat caused by bad gut bacteria. Berberine keeps these harmful intestinal bacteria in check resulting in an inhibition of the degradation of dietary polysaccharides and a decrease in the creation of new fat.47plos.org